The Southern Georgian Bay OPP are asking for the public's help to identify some motorcyclists who were stunt driving on the 400 back in September.

At around 3:30pm on Saturday, September 26, the OPP received a number of calls about four to five riders on the 400 at Hwy 12 in Tay Township. They were spotted northbound, then southbound weaving in and out of traffic at speeds that were estimated to top 200 kilometres an hour.
Although there were no crashes associated with this behaviour, numerous drivers voiced concerns.

Investigators have provided a photograph of a possible suspect motorcycle from this occurrence. 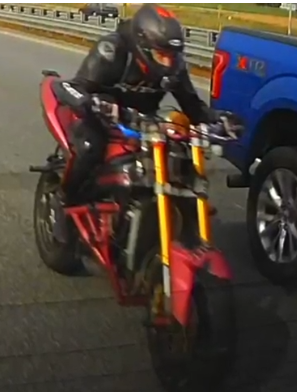 Anyone having knowledge of these suspect vehicles and/or occupants or possibly dash cam video of this incident is asked to contact the OPP at 1-888-310-1122, opp.southern.georgian.bay@opp.ca or by calling Crime Stoppers at 1-800-222-TIPS (8477). You can submit your information online at www.p3tips.com. Crime Stoppers does not subscribe to call display and you will remain anonymous. Being anonymous, you will not testify in court and your information may lead to a cash reward of up to $2,000.00. You can follow Crime Stoppers of Simcoe Dufferin Muskoka www.crimestopperssdm.com on Twitter or Facebook.