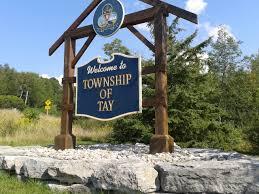 Tay firefighters were recognized for their life-saving actions earlier this year. Mayor Scott Warnock and Fire Chief Brian Thomas awarded medals of valour to Deputy Fire Chief Shawn Aymer and volunteer firefighters Jesse Bond, Earl Grigg and Brian Jarvis for performance above and beyond the call of duty at extreme personal risk and having been instrumental in rescuing and saving the lives of two people.

These firefighters were four of 20 volunteer firefighters who responded to a fire on January 8, 2018 at 4157 Nielsen Road. Early detection of the fire from working fire alarms facilitated the evacuation of four of six occupants prior to the fire department's arrival. Firefighters deployed two fire suppression canisters to slow the growth of the fire until the apparatus arrived. Firefighters then entered the building and searched for and rescued the two remaining occupants trapped on the second floor.

In a Letter to the Editor, the family affected expressed thanks to Tay Fire and Emergency Services. "Our deepest gratitude goes out to the Tay Fire Department for their courage and devotion to saving our family and putting the fire out, our forever heroes," said the Stanley family (The Tay Township Report, March 16, 2018).

Mayor Scott Warnock and Fire Chief Brian Thomas were pleased to award medals of valour to the deserving firefighters.

"Although what transpired the night of the fire is what we train for, a scenario like this may only happen once in a firefighter’s career. These medals of valour are to recognize the adversity Shawn, Jesse, Earl and Brian had to overcome to save the lives of two Tay residents. It’s a privilege to work alongside these four members of Tay Fire and Emergency Services," said Fire Chief Brian Thomas.