Dr. Maleek, the California rapper accused of duping people into posing as his fans, tried to get thousands of dollars from a fellow indie artist last month by promising to arrange for Canada’s Tory Lanez to be featured on one of his songs.

Zach Moder, a hip hop performer from Duluth, Minnesota known as MN Moder, told iHeartRadio.ca he was contacted via Instagram by Dr. Maleek on June 28 with an offer to purchase a verse from Lanez.

Dr. Maleek, who is not a doctor and whose real name is Malik Gabertai (in June 2016, a judge approved Gabertai’s petition to change his surname to Hamza), told Moder his name is Maleek Sandoval. 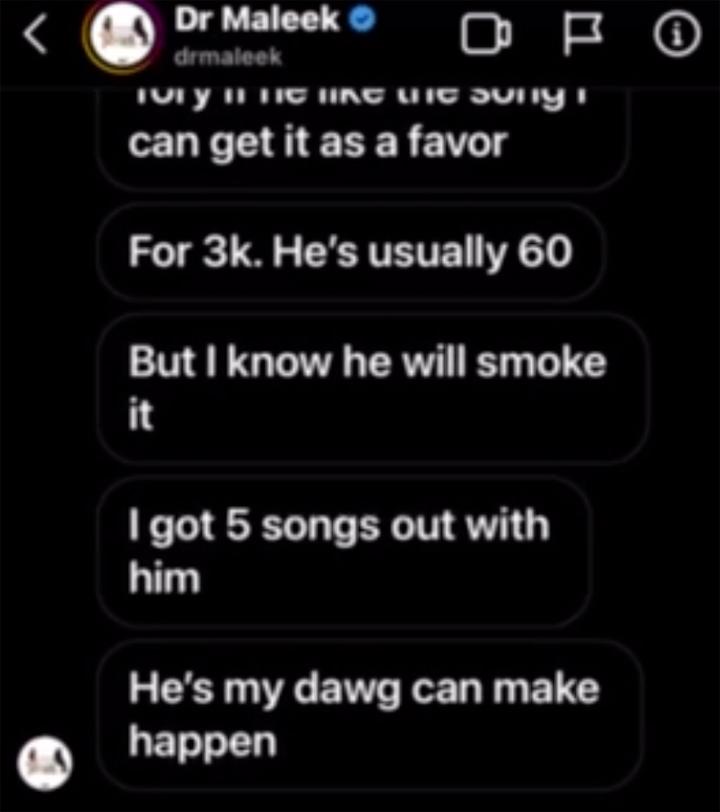 “A tory feature is a big level up from where u at,” Gabertai told Moder, who suggested featuring Lanez on a remix of his track “Maserati.”

Gabertai told Moder he has known Lanez for seven years “so we have a good relationship” and  he promised to make sure the rapper helped promote the track. “I’ll make him post it as a story minjmum (sic),” he wrote.

In what appears to be a staged radio interview posted on YouTube, Gabertai said he met Lanez in 2013 in Los Angeles. “I feel like he gets a lot of slack. I just feel, like, artistically, a lot of people just come at him for, like, things they say he steals and stuff,” he said. “People say he takes other people’s styles but I feel like even if that was true, he does it better than a lot of people.”

Lanez’s name showed up in a series of Craigslist ads last year recruiting people to act as fans at Dr. Maleek shows scheduled in Toronto, New York City, Houston, Los Angeles and Seattle in exchange for hundreds of dollars. The postings promised that “some big special guests (Tory lanez, Chris brown, French montana)” will be at the shows.

In the end, only the NYC show took place (and another in Oakland, California), none of the “fans” were paid and Lanez did not appear.

Gabertai told Moder a deal could be struck for Lanez’s verse without a formal agreement. When Moder insisted there be a contract, Gabertai said he had “nothing written” because “I’m like a no headache type guy.”

Moder said he suspected almost immediately he was being scammed. “I was first skeptical when he told me the price,” he recalled, “but I knew something was up for sure when he said no contracts. That’s a huge red flag.

“I’ve bought verses and done shows in the past with bigger name artists so I know that everything needs to be on paper before any music/business gets done.”

Moder drafted a bogus one-page agreement with gibberish like “either party is empt to not receive their end of the deal” as a test. Gabertai responded “Really nice contract. Well wrote” and signed it “Maleek S” on June 29. 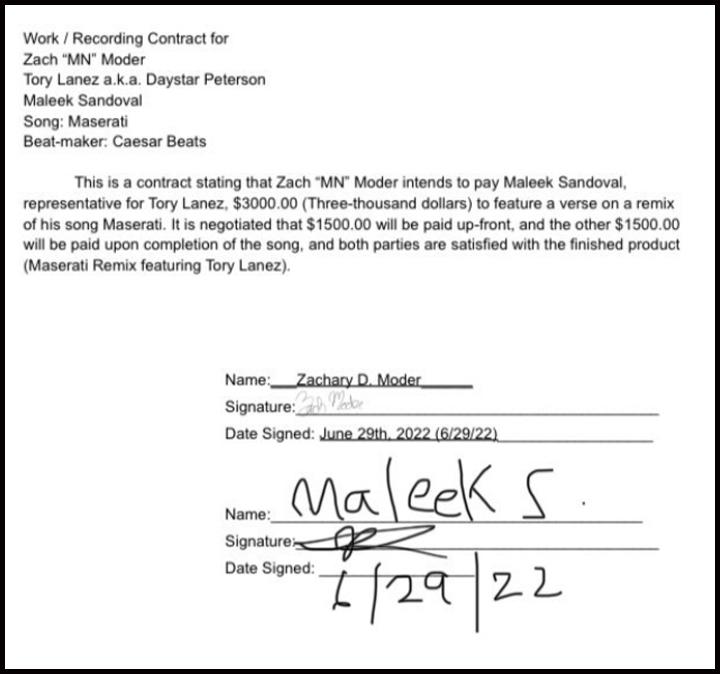 What Gabertai really wanted, though, was cash. He was so anxious for Moder to transfer funds to him – via Zelle or Apple Pay – that at one point in the conversation he offered to take half up front and the other half after Lanez finished recording his verse – which Gabertai claimed Lanez would complete quickly because “he usually take 30 mins max.”

When Moder stalled, Gabertai wrote: “If you can come up with 1k asap bro I can at least send to him and have him record … And I’ll risk the 2k that you’ll pay.”

Moder never sent any funds but did send a copy of his song to a Gmail address Gabertai provided. About 10 minutes later, according to Moder, Gabertai told him that Lanez approved of the track.

“He said he like,” Gabertai wrote, later claiming Lanez was “in studio” at the time.

“It was hard to believe it took that short of time to get a hold of someone as busy as Tory,” Moder said.

Dr. Maleek was exposed last year for allegedly getting dozens of people to buy tickets to his shows in Oakland and New York City by promising to both reimburse them and pay them hundreds of dollars to pretend to be fans. (Dr. Maleek publicly denied being involved in the scam.) In January, iHeartRadio.ca reported that he falsely promoted himself as the special guest at a 50 Cent show and claimed he had a “sold out” show in London in March.

During their online conversation, Moder asked Gabertai about the iHeartRadio.ca investigation and Gabertai replied: “Lmao some hater fake article when I was on tour … nonsense article back when I went on tour making up stuff from a guy who’s (sic) daughter got piped (sic) in Toronto. Got lawyers on it.”

(The author of the article does not have a daughter.)

But, despite being called out by Moder, Gabertai continued to try to get cash from him. On June 30, he messaged Moder claiming that Lanez had recorded a verse for “Maserati.” He wrote: “He just sent it to me this morning. I didn’t even know he did it.”

Moder asked Gabertai to send him a clip. He replied: “Ummm… I mean bro. How does that make sense.”

(“Corny” appears to be a Gabertai favourite. In an Instagram Story last September, he called the author of this article a “cornball” and in a DM last December to one of the “fan scam” victims, he wrote: “Corny white boy. You look so corny making lies … You looking corny.”)

When it became clear that Moder wasn’t going to send him any cash, Gabertai threatened to take “Maserati” as his own. On July 1, Gabertai told Moder he was going to “add a hook to this song and just re release it” because he is “not gonna let tory verse go to waste.”

When Moder told Gabertai he doesn’t have the right to use the song, Gabertai replied: “Bro I don’t need ya permission since we signed contract for tory song. That’s an executed contract. That wasn’t fulfilled for 3k. So I own the song for 3k worth now Cuz tory never got paid.”

(Of course, this is not true.)

Gabertai fumed: “Hey bro your (sic) small fish bro I’m just letting u know - so you can grab a royalty … You did me dirty and now I got a new record of it.” 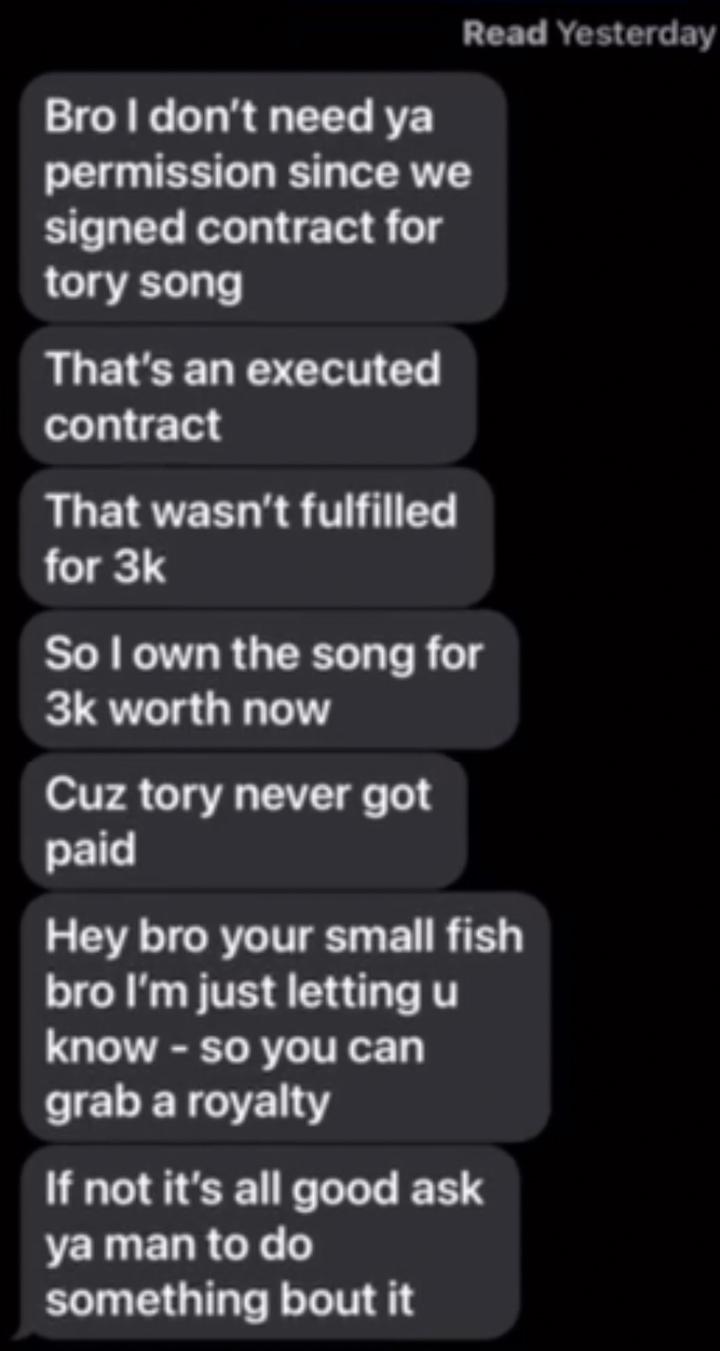 According to public records, a “Malik Gabertai” was sued last July in Orange County Superior Courts for $3,316.79 owed on a Citibank credit card he allegedly stopped paying in 2017 while living in Newport Beach, CA. In May 2020, another collection agency went to court seeking $3,026.61 from a “Malik Hamza” of Irvine, CA for a Jewelry Customs/Synchrony Bank debt.

Gabertai was asked why he told Moder his legal name is Maleek Sandoval as well as questions about his relationship with Lanez and when he was authorized to sell verses on his behalf.

Lanez did not respond to questions from iHeartRadio.ca but a rep confirmed that Gabertai "is not authorized" to represent Lanez. The same rep wrote, In a July 2nd email to Moder, that Gabertai’s claims are “not true” and added: “Tell him we will sue him if he keeps up these shenanigans.”

Moder said he shared his experience as a warning to other independent artists.

“I just hope not too many people fell for this and that it can help other artists like me in the future who work their ass off to not get roped into fake opportunities and lose money,” he said. “What a clown.”

Listen to music from Tory Lanez