The happy couple were married on May 7 in the backyard of the home they bought on Nashville’s east side in January.

“I don’t know how many people got engaged and married in quarantine,” the 34-year-old “Just Married” singer told iHeartRadio.ca. “Everyone else, I’m sure, thinks it’s lightning speed but for us we still can’t move fast enough. We’re just really, really in love.”

Olsen and Ella met at the 2018 Canadian Country Music Association Awards in Hamilton, Ont. when his publicist asked if Ella wanted to talk to Olsen about his new song “Timing Is Everything” (in which Olsen sings about how “it feels so serendipitous” to meet “the prettiest girl on the planet”).

There were sparks. “Looking back now, it’s so funny, you can so tell,” Olsen said. “In that whole interview we are just absolutely smitten with each other. I can see it now. It’s so obvious.”

Fast forward to earlier this year and the couple’s plan for a mid-April vacation in Hawaii. Olsen planned to pop the question to Ella on top of a mountain overlooking the Pacific Ocean.

“I just couldn’t wait to do that,” he recalled. After picking up the ring on March 7, he realized he literally could not wait. Olsen called Ella’s father to get his blessing. “He was more than happy and thrilled which made me even more happy.”

The next day, Olsen followed Ella upstairs to the bathroom.

“After she finished brushing her teeth I just grabbed her and I just started talking like I normally do – I just shot from the heart, honestly – and I had the ring in my pocket,” Olsen shared. “She didn’t see it coming. She said I say nice things all the time so she didn’t know anything different was happening.

“So when I pulled the ring out of my pocket and got down on one knee, she started crying and so did I.”

The newly betrothed couple decided they would tie the knot while in Hawaii – but the trip was cancelled due to the COVID-19 pandemic. “I wanted to call her my wife. I couldn’t wait,” he said. “I don’t know how long this is going to take and she had to be my wife and I couldn’t wait one more minute.”

So, in early May, Olsen and Ella decided there was no time like the present. “It was just going to be the two of us anyway in Hawaii,” he explained, “and we thought, what better place to do it than our backyard?”

They hired Nashville officiant Zelda Sheldon. “She was wonderful and had an accent - I’m pretty sure it was Australian - which was a nice touch,” said Olsen. “She was a sweetheart and came over in a mask and gloves.”

The bride wore a dark dress with white polka dots and the groom donned khakis and a white T-shirt for the ceremony, which was captured on an iPhone the couple set up.

“It felt perfect to us,” Olsen said. “It was everything we hoped it to be.” 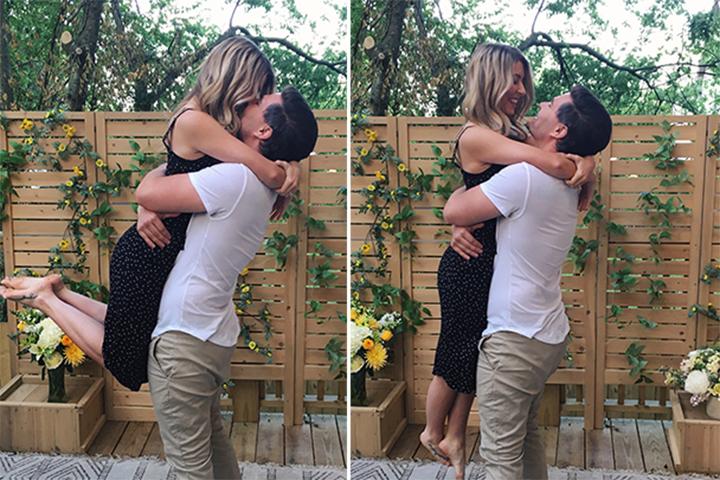 Ella is a lifelong country music fan – she received a Shania Twain CD on her fifth Christmas – who grew up on a farm north of Toronto training horses and competing across North America. She spent several years living in Kentucky, where she studied communications, and then returned to Canada to start her broadcasting career.

Olsen, a native of Newmarket, Ont., followed his country music dreams to Nashville in 2004. He released his debut EP in 2009 and established himself as a singer-songwriter to watch – earning a Rising Star nomination at the Canadian Country Music Association Awards in 2015.

In addition to performing, Olsen co-wrote Keith Urban’s 2017 hit single “Blue Ain’t Your Color,” which was nominated at both the Grammys (Best Country Song) and ACM Awards (Song of the Year).

Olsen said falling in love with Ella has made him a better songwriter. “I feel like I’m writing just the absolute best, at the top of my ability,” he said. “She inspires the best parts of me to come out.

“She works so hard and I just try to keep up with her and the byproduct of that, I guess, is success.”

The newlyweds hope to reschedule their trip to Hawaii, where they plan to exchange vows again.

“Her and I are so similar in so many ways and at the core of it her and I just love each other so much and nothing else really matters,” said Olsen. “It feels very real with her.”