Canadian country star Brett Kissel was this week branded a “loser,” “uneducated” and “ignorant” after he defended a family member who protested COVID-19 restrictions.

The Alberta native’s 42-year-old cousin Carmen Kissel-Verrier and her husband Sean Verrier attended a “Walk For Freedom” march in Edmonton last Saturday, where she carried a sign that read: “They who give up freedom for safety deserve neither.” (It’s a variation on Benjamin Franklin’s words “Those who would give up essential Liberty, to purchase a little temporary Safety, deserve neither Liberty nor Safety.”)

In a Facebook post on Sunday, Kissel-Verrier wrote that “Lockdowns didn’t work for Jesus and they don’t for us, either!” and she urged her Facebook followers to defend their rights “before they are gone forever.”

Kissel-Verrier added: “I really believe that everyone has ‘covid-fatigue’ and that if you’ve got a little gas left in your tank, that NOW is the TIME to pipe up. Get loud … I suspect this will be a great big summer of revolution!”

Among the hashtags she included in the post was “#unmaskthetruth.” 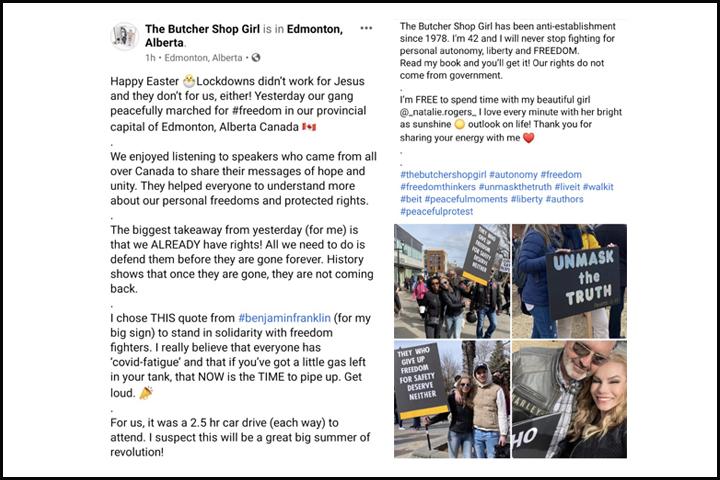 Kissel, 30, has previously plugged his cousin’s book, The Butcher Shop Girl: A Memoir For Misfits & Mavericks, on social media – so Vancouver fan Sherry Foster tweeted a screenshot of Kissel-Verrier’s Facebook post about the march and told the singer: “I love you but disappointed that you asked us to follow her.”

In a reply, Kissel tweeted: “Everyone is entitled to their own opinion. That’s what makes Canada free. Pro-Vax? Pro-Lockdown? Pro-Double Mask? Your body. Your life. Your choice. Anti-'this' vax? Anti-lockdown? Anti-mask? Your choice. I hold space for the human spirit, and for my community.” 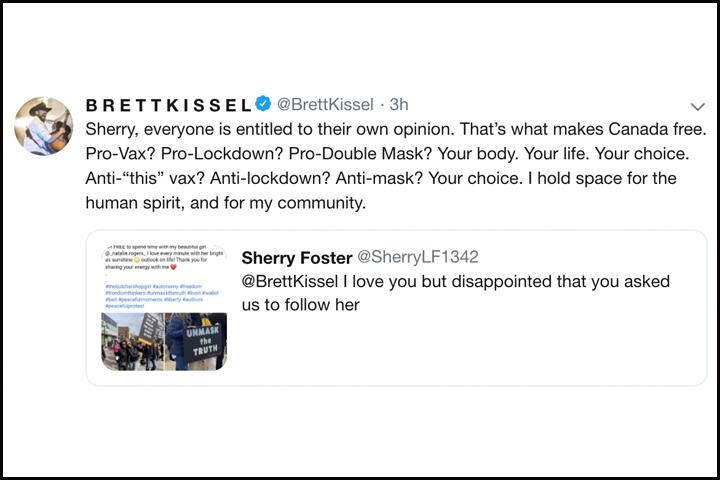 Canadian singer Damhnait Doyle reacted on Twitter by telling Kissel: “You cannot ‘hold space’ for the people who have died from this virus. They died in part because of people who have denied science and refused to mask up and social distance. Holding space is about accepting people’s worldview – not PROMOTING their worldview. Big difference.”

When Kissel countered that he was not promoting a specific view, she fired back: “You have 62,000 followers. By giving space to the idea that not wearing a mask etc is totally cool with you – what are you doing if not promoting that ideology?”

Several fans were also irked by Kissel’s reply to Foster.

“That’s such a bad take,” opined @tarynor. “We’re still in this pandemic because people have been free to make their decisions and people like this continue to value their ‘freedoms’ over anyone else. Do better than this.”

A tweet from @LanTs_ read: “People are dying BECAUSE of anti-maskers. Opinion and science are two different things. Extremely disappointing you have these views. Unfollowing you from every platform and no longer listening to your music.”

@valerieinto tweeted: “This [would] be great if the choices of some didn’t actually effect the health of other people and limited their choices to physically survive.”

“That’s a big unfollow from me,” fumed @alex_bushnell. “Listen to the doctors and scientists for health advice, not celebrities.”

@Lunaseawaters shared: “No longer a fan. Freedoms end when your ‘choices' removes the freedoms of others. Such as their freedom to live because you ‘choose’ to not follow public health protocols!”

A tweet from @PatBeaton1 read: “sorry ta say, unfollowing ya Brett, choices have consequences, mine here is harmless, those anti-masker choices can kill someone.”

@melspicer78 shared: “So disappointed. I am struggling with your feelings on this. Opinions are very different. This is wrong. Science over selfishness. Save others, save ICU beds! I wish you held space for knowledge to educate your ignorance on this.”

@GrizzlyGrann tagged Sportsnet and the Edmonton Oilers in a tweet that read: “Maybe time to stop featuring this loser during oilers broadcasts?” (Kissel has performed the Canadian national anthem ahead of Oilers games.)

Of course, some people came to his defence and suggested he should not be blamed for the views and actions of his cousin. 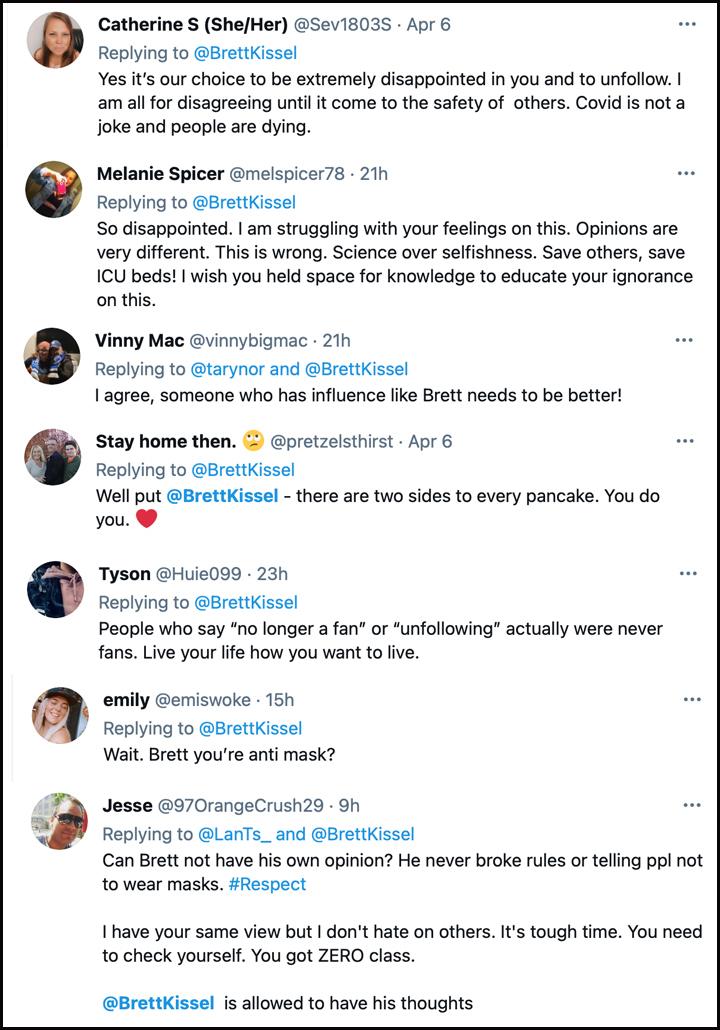 The singer, who has more than 68,000 Twitter followers, deleted his reply to Foster.

(Last August, Kissel-Verrier posted a photo of an anti-lockdown protest in Montreal on her personal Facebook account that she captioned: “Thousands protest MASKS and Totalitarian Rule in Quebec.”)

Kissel-Verrier did not respond when asked on Tuesday night why she deleted her social media posts. She posted several Instagram Stories in which she is seen wearing a mask inside an Indigo store in Edmonton. 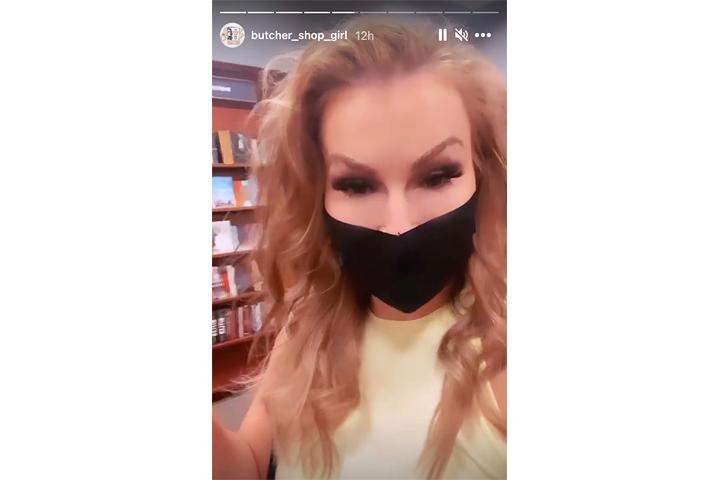 A rep for Warner Music Canada declined to comment on the kerfuffle. The singer’s manager Louis O’Reilly did not respond on Tuesday night to questions and a request for a statement to clarify Kissel’s view on COVID-19 health measures.

In his replies to Twitter followers, Kissel insisted he was “neutral” – and “not ignorant” – and described his reply to Foster as a “very neutral tweet.”

He wrote that in over a decade on Twitter he has been “very conscious and cautious to spread love and acceptance when I can” and shared that he has “lost family” to COVID-19.

“The lockdowns, + the entire Covid 19 pandemic has brought separation to all. Dying of Covid = awful. Dying of suicide, due to Covid = awful,” wrote Kissel. “It’s a dark era we live in, truly.”

Kissel’s new album What Is Life? drops on Friday.

Listen to music from Brett Kissel