A right-wing nut with more than 390,000 Twitter followers has suggested TV’s The Masked Singer was part of “demonic” plot to “condition” people to wear masks in public.

“I find it very interesting how the show ‘Masked Singer’ hit America in January 2019, a little bit over a year before they started forcing us all into masks,” DeAnna Lorraine tweeted last Friday.

“It’s almost like they were beginning to condition the public that masks were ‘normal’ and ‘cool.’ The media is demonic.” 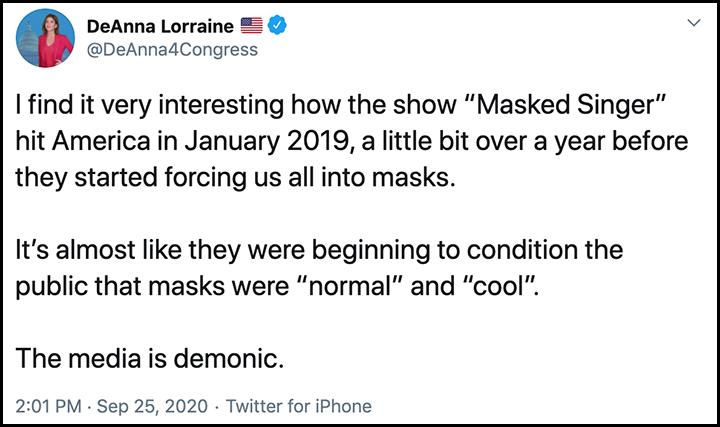 The Masked Singer, which premiered in the U.S. and Canada on January 2, 2019, is a celebrity music competition series based on the South Korean series Mystery Music Show: King of Mask Singer, which debuted in 2015.

Lorraine is seemingly unaware that citizens of countries around the world – not only in the U.S. – are wearing masks to help slow the spread of COVID-19.

Not surprisingly, the failed Republican candidate for U.S. Congress was quickly eviscerated on social media.

“The singers actually wear full costumes, not just masks, so you might want to cobble together a theory about how Halloween has been setting us up since the Eighth Century,” read one tweet.

Another read: “I’ll do you one better: Just 26 years before this pandemic hit, Hollyweird released a movie called ‘The Mask.’ Absolutely demonic. They’ve been conditioning us for 26 years, Deanna!!”

Lorraine acknowledged the thousands of reactions by rehashing an anti-Semitic conspiracy theory about philanthropist George Soros.

“I see I struck a cord (sic) tonight with my (sic) this tweet since the whole Soros-paid-blue-check-brigade is out in full force tonight!,” she tweeted. (Twitter’s verified checks are, in fact, white.)

“I really wonder what he pays these hacks.”

Lorraine added: “Seriously, mock this all you want. You leftists have allowed yourself to be completely taken over and become absolute SHEEP! Try for once to think critically rather than just what the Soros-bought-and-paid-for-media shoves in your face. WAKE UP!”

It's worse than that. The conspiracy goes all the way back to ancient Greece. pic.twitter.com/4wrer5sFBh

I find it very interesting how the Star Wars character 'Darth Vader' hit america in 1977, around 43 years before they started forcing us all into masks.

It’s almost like they were beginning to condition the public that masks were “normal” and “cool”.

The media is demonic. pic.twitter.com/qX2TFdm22y

Hi there DeAnna, just wanted to get your take on this for a sec: Im British, live in Britain & never watched or even heard of “masked singer” & seen as the pandemic is global, how have we been conditioned to start wearing masks? Or is the world the US & we just orbit around you?

The Masked Singer returned Sept. 23 for its fourth season. Panelists Robin Thicke, Jenny McCarthy, Ken Jeong and Nicole Scherzinger are spaced further apart than previous seasons and the costumed celebrities perform in a near-empty studio, with audience sights and sounds added in post-production.

“Due to health restrictions, visuals of audience featured in this episode included virtual shots as well as shots from past seasons," reads a disclaimer at the end of the show.

Rapper Busta Rhymes, as The Dragon, was the first contestant eliminated.

The Masked Singer airs in Canada on CTV, part of the same parent company as this website.

Listen to music from Busta Rhymes