Terrifying Models Shows What Streaming Service Addicts May Look Like In 20 Years.

Netflix and ill. Researchers have constructed disturbing digital sculptures illustrating the physical toll watching hours and hours of television can have on the human body. OnlineGambling.com commissioned the creation of 3-D models showing the bodily damage binge-watching can do to the human body over time, caused by lack of exercise, a poor diet and a sedentary lifestyle. “From obesity and posture damage to premature aging and bloodshot eyes, these are just some of the nasty effects this unhealthy lifestyle could cause,” reads an intro to the image series, called Meet Eric & Hannah: The Netflix Bingers! 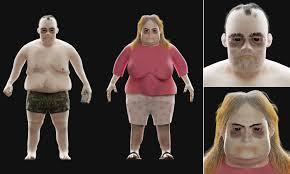 The interactive site offers data on symptoms caused by gorging on TV — including increased risk of bowel cancer, rounded shoulders and poor posture — as well as less-than-reassuring figures about TV binging itself. “Since staying at home more because of the coronavirus pandemic, on average 44% of residents surveyed all admitted to using streaming services more than video calls with friends, playing video games, board games and even working!” the site states.