They Just Named The World's Largest Dinosaur In Drumheller

We’ve all been to Drumheller to see all of the cool things it has to offer inclusive of the ICONIC dinosaur which is officially the largest dinosaur in the WORLD. How cool is that Berta?! The weird thing though is that this giant dino has existed for over 20 years in Drumheller without a name. So to mark the 20th anniversary of this giant icon the Royal Tyrell Museum thought it was finally time to name the dino. Now the no longer nameless wonder has a name that over 560 people voted on and can you guess what it is before I tell you? Take a guess… okay…it’s…TYRA! A little weird right? Don’t tell me it doesn’t remind you of Tyra Banks but I digress because apparently it’s short for Tyrannosaurus Rex and realistically since it’s 2020 anything is possible so why not a fake dinosaur name Tyra. Either way, you can catch this majestic creature at the Royal Tyrell Museum daily from 10am- 5:30pm and even have a chance to walk up it- and while you’re at it, go wish Tyra a happy belated birthday! 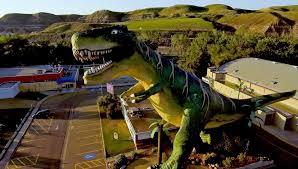