Adam Levine Responds To Affair Claim: 'I Crossed The Line'

Adam Levine responded Tuesday morning to a claim that he cheated on his pregnant wife Behati Prinsloo.

“I used poor judgment in speaking with anyone other than my wife in ANY kind of flirtatious manner,” the 43-year-old Maroon 5 frontman wrote in an Instagram Story.

“I did not have an affair, nevertheless, I crossed the line during a regrettable period in my life. In certain circumstance it became inappropriate; I have addressed that and taken proactive steps to remedy this with my family.”

Levine and Prinsloo, his wife of eight years, have daughters Dusty, 6, and Gio, 4, and are expecting a third child.

“To be this naive and stupid enough to risk the only thing that truly matters to me was the greatest mistake I could ever make,” he wrote. “I will never make it again. I take full responsibility. We will get through it. And we will get through it together.” 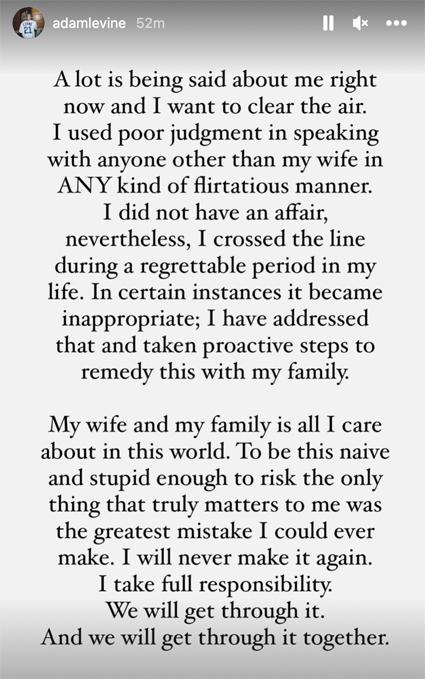 Levine’s statement came after Instagram personality Sumner Stroh claimed in a TikTok video that she had a year-long affair with Levine.

“At the time, I was young, I was naive and, quite frankly, I feel exploited,” the 23-year-old said. “I wasn’t in ‘the scene’ like I am now, so I was definitely very easily manipulated.”

Stroh said she went public after a friend allegedly tried to sell the story to a tabloid.

In one of several DMs Stroh said came from Levine, he allegedly asked: “I’m having another baby and if it’s [a] boy I really wanna name it Sumner. You ok with that? DEAD serious.”

@sumnerstroh embarrassed I was involved w a man with this utter lack of remorse and respect. #greenscreen ♬ original sound - Sumner Stroh

Listen to music from Maroon 5