The Canadian singer was part of a line-up that also included A$AP Rocky, Jason Derulo, David Guetta and Tiësto.

“This is a unique opportunity to send a powerful message to the world that your name and talent will not be used to restore the reputation of a regime that kills its critics,” Hatch Cengiz wrote in The Washington Post.

“I know that you are dedicated to your fans and are traveling to Saudi Arabia on their behalf. However, there are hundreds of Saudis, of all ages, backgrounds and religious beliefs, languishing in prison, punished for merely expressing their opposition to the merciless Saudi dictatorship.”

Cengiz’s plea came after the Human Rights Foundation (HRF) published an open letter to Bieber urging him to pull the plug on his concert in “one of the most repressive regimes on Earth.”

According to the HRF, the prince has “spearheaded a brutal crackdown on dissidents, including women’s rights activists and sexual minorities, through arbitrary detention, prosecution, and barbaric methods of execution, such as decapitation, crucifixion, and stoning to death.” 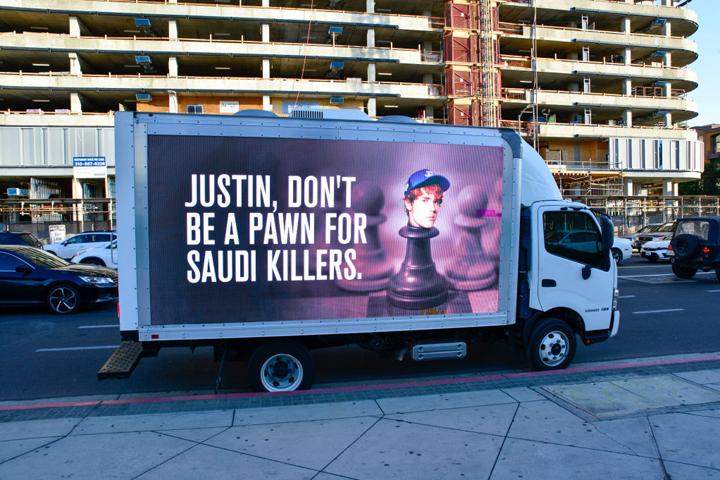 In a segment that aired last month on 60 Minutes, former Saudi intelligence officer Saad Aljabri, who fled to Canada, described Mohammed bin Salman as “a psychopath with no empathy” who “doesn't feel emotion.”

In 2018, bin Salman allegedly sent a six-man team to Ottawa on a mission to kill Aljabri (they were denied entry by Canadian authorities). Aljabri warned Prince Mohammed is “a psychopath, killer, in the Middle East with infinite resources, who poses threat to his people, to the Americans and to the planet.”