Justin Bieber apologized Wednesday after endorsing the music of country star Morgan Wallen, who was caught on video using a racial slur earlier this year.

Bieber posted an image of Wallen’s Dangerous: The Double Album in an Instagram Story and captioned it: “Love this album.”

Some of Bieber’s 187 million Instagram followers were quick to criticize the Canadian pop star for publicly supporting Wallen.

Bieber deleted the Story and added another in which he wrote: “I had no idea that the guy’s music i posted was recently found saying racist comments. as you know i don’t support or tolerate any sort of racism or discrimination. I had no idea, I sincerely apologize to anyone I offended.”

In February, Wallen was suspended from his label and taken off playlists after TMZ posted a video in which he is heard referring to someone as a “p***y-a** n****r.”

Last month, Wallen admitted to GMA that he had used the slur before. “I wouldn’t say frequently. No, no, not frequently,” he said. “It was just around this certain group of friends.”

Wallen said he was “clearly drunk” in the video. “In our minds, it’s playful, you know? I don’t know if that sounds ignorant, but that’s really where it came from. It’s wrong. … I didn’t mean it in any derogatory manner at all.”

In another Instagram Story on Wednesday, Bieber brought up his own scandal involving the N-word.

“When I was a kid I was incredibly ignorant and said some very hurtful racist jokes that clearly were not funny,” he recalled. “I hurt a lot of people especially the black people in my life but was fortunate enough to have had them educate me on the horrifying origin of the n word.”

In 2014, Bieber apologized publicly after videos surfaced in which a 15-year-old Bieber repeatedly used the N-word. In a statement at the time, the singer called the joke a “reckless and immature mistake” and said he didn’t fully understand “the power of certain words and how they can hurt” when he was younger.

Bieber said learning of Wallen’s experience “brings those painful memories back up” and he felt it was “important to bring this up to hopefully educate people who may be ignorant to the topic of racism and how hurtful it is.”

The singer, who in April was accused of cultural appropriation for sporting dreadlocks, added: "I have so much more to learn and I'm grateful for my black brothers and sisters for being patient with me as i have a long way to go." 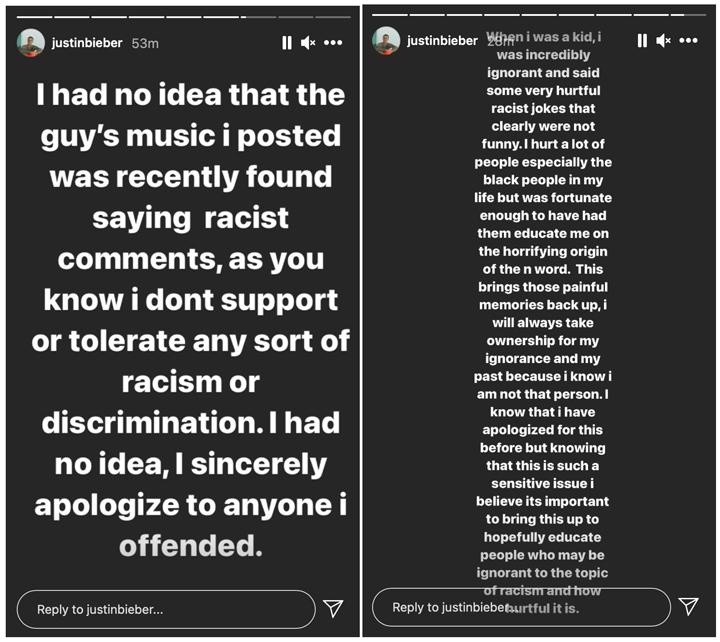