Jann Arden is bringing Canadians a little warmth with her brand new special Jann Arden One Night Only.

“It’s just the perfect show for this time of year,” the singer-songwriter said, only hours before tonight's premiere on CTV. “People are gearing up for the holidays, they’re feeling sentimental these days, they want to go revisit times in their lives that were seemingly more easy and easy-going, happy… and that’s what the show is. It really is about capturing those kinds of moments.”

The special (which will begin streaming on Crave on Dec. 6) was taped on Nov. 26 in front of an audience of about 60 people at The Great Hall in Toronto.

Arden, enjoying a morning snack of Squish candies, told iHeartRadio.ca the show is conversational, candid and “kind of off-the-cuff.”

She explained: “It really is seeing a live show, that’s what the vibe of this is. It’s very much like that. It looks beautiful, they did an incredible job on the set.”

Arden shares some holiday memories, sings "The Christmas Song," and performs some of her beloved hits, including “Good Mother” and “Insensitive.”

“I never get sick of singing those songs,” she insisted. “I have to keep in mind that [the audience is] not hearing the song every night like I am. They haven’t heard ‘Insensitive’ live maybe in 10 years, so I have to keep that in mind.

“We did a really different version of it for the show and it’s really haunting. It starts with bass guitar and it’s very stripped down and slowed down and I love it.” 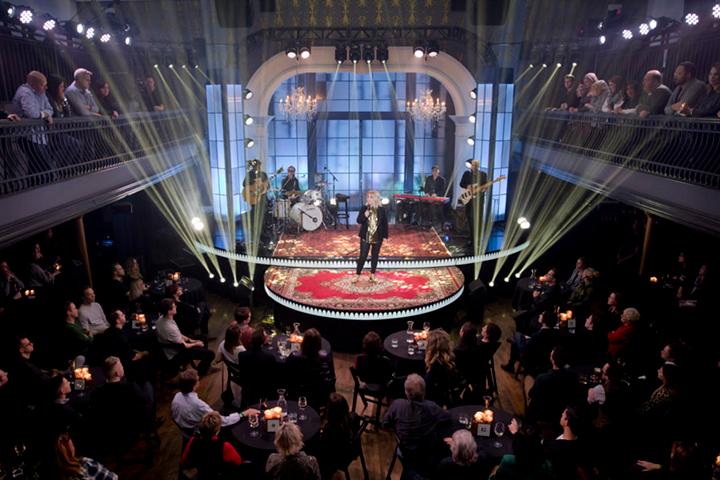 The 57-year-old Calgary native also hosts The Jann Arden Podcast, which is available on iHeartRadio Canada. “It really is a potpourri. We never really have a theme and I think people enjoy that,” said Arden. “You can literally join in to any part of the podcast and follow along. It’s really an easy and fun conversation.”

Arden recently wrapped Season 2 of the comedy series Jann, in which she plays a fictionalized version of herself. It returns to CTV in 2020.

“It’s even funnier than it was last year,” she promised. “The family continues to be super zany and super dysfunctional. We’ve got some great guest stars this year. Sarah McLachlan makes an appearance this year. There’s a bunch of other people I want to say…I’ll just leave it at that.”

Arden said fans are in for some surprises as well as a show that feels bigger. “We had one episode where we had 600 extras,” she recalled.

MORE: Jann Arden Shows Off Her Funny Side In Jann

All of these projects, combined with touring, keeps Arden busy – and she wouldn’t have it any other way.

“The whole reason I went into the arts is that I really didn’t want to work. I wanted to have fun with my pals, I wanted to meet new people, I wanted to travel and make things that made people happy,” she explained. “So that’s what I’ve been doing the last 30 years.”

Late last month, Arden took time out of her schedule to tweet smart, witty responses to a handful of haters and trolls.

“You can’t have a fight with somebody who won’t fight back,” she explained. “It makes them realize how ludicrous their statements are.

“You don’t have to be mean back. Actually kindness goes a lot further.”

When one Twitter user asked “Would you be happy if your ass wasn’t a double wide?,” Arden responded: “I love my double wide ass. You will never get near it – but I think you know that already…”

Arden laughed. "I don’t think it’s the response that the guy wanted at all,” she said. “He wanted that to somehow hurt me and diminish me.”

The star knows Twitter represents a very small fraction of the population and said she, in fact, has empathy for people who need to be nasty.

Jann Arden One Night Only premieres Dec. 4 at 9 pm on CTV and begins streaming on Crave on Dec. 6. Both are part of Bell Media, parent company of this website.