Britney Spears Has Been Given Her Life Back

After 5,034 days of living under a conservatorship – where just about every aspect of her life was controlled by others – Britney Spears was granted her freedom on Friday.

At a hearing in Los Angeles Superior Court, judge Brenda Penny ruled that the conservatorship will be terminated and the pop superstar can begin making her own medical, financial and personal decisions for the first time since 2008.

"Good God I love my fans so much it’s crazy !!!," Spears wrote in an Instagram post about an hour after the ruling. "I think I’m gonna cry the rest of the day !!!! Best day ever."

Her lawyer Mathew Rosengart told reporters outside the courthouse it is "a monumental day" for the singer, who celebrates her 40th birthday next month. "Britney, as of today, is a free woman and she's an independent woman."

Spears' fiancé Sam Asghari reacted to the decision by posting a pink square on Instagram with the word "FREEDOM." He captioned it: "History was made today. Britney is Free!"

Spears was placed under a temporary conservatorship on Feb. 1, 2008 after she suffered a mental health breakdown. The conservatorship was made permanent on Oct. 7, 2008.

Even as fans around the world pleaded for her freedom, Spears did not formally seek to terminate the conservatorship until Sept. 22, 2021.

The changes came three months after Spears pleaded with Penny to let her out of the conservatorship.

“I’ve lied and told the whole world ‘I’m OK and I’m happy.’ It’s a lie," she said by telephone during a hearing. "I’ve been in denial. I’ve been in shock. I am traumatized. You know, fake it till you make it. But now I’m telling you the truth, OK? I’m not happy. I can’t sleep. I’m so angry it’s insane. And I’m depressed. I cry every day.”

In one particularly heartbreaking revelation, the mother-of-two said she was not allowed to have more children. "I want to be able to get married and have a baby," said Spears. "I have an [IUD] inside of myself right now so I don’t get pregnant. I wanted to take the [IUD] out so I could start trying to have another baby. But this so-called team won’t let me go to the doctor to take it out because they don’t want me to have children – any more children.”

Spears also said: “My dad and anyone involved in this conservatorship and my management who played a huge role in punishing me when I said no — ma’am, they should be in jail." 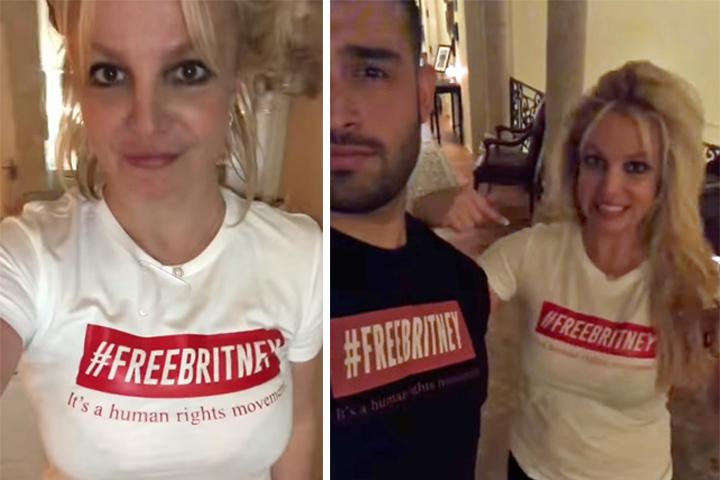 In an Instagram post last month, Spears acknowledged the #FreeBritney movement: “I have no words … because of you guys and your constant resilience in freeing me from my conservatorship … my life is now in that direction !!!!! I cried last night for two hours cause my fans are the best and I know it … I feel your hearts and you feel mine … that much I know is true !!!!!”

"Whether Britney performs again will be up to Britney, at the right time," Rosengart said on Friday.

Exactly one year ago, Spears' then-lawyer Samuel D. Ingham III told the court his client "will not perform again if her father is in charge of her career."

She doubled down in July of this year.  “I'm not gonna be performing on any stages anytime soon with my dad handling what I wear, say, do, or think,” Spears wrote in an expletive-filled Instagram post. “I'm not gonna put on heavy makeup and try try try on stage again and not be able to do the real deal with remixes of my songs for years and begging to put my new music in my show for MY fans ... so I quit !!!!”

Fans are hoping a free Britney will change her tune.

Spears hasn't released a studio album since 2016's Glory and hasn't performed since her Piece of Me Tour ended in October 2018. In January 2019, Spears announced she was scrapping her Las Vegas residency show, Domination.

Last year, her youngest son Jayden Federline said he wasn’t sure if his mother will make music again. “Actually, I haven't seen her doing a lot of music, at all,” he said, during an Instagram Live. “I don't think that … I don't know, dude. I don't even know.

“I remember one time I asked her, I said, ‘Mom, what happened to your music?’ and she was like, ‘I don't know, honey. I think I might just quit it.’ I'm like, ‘What? What are you saying? Like, do you know how much bank you make off of that stuff?’”

In June, Spears responded to fans wondering if she will ever be back on stage. “I have no idea,” she said in an edited Instagram video. “I’m having fun right now. I’m in a transition in my life and I’m enjoying myself.”

WHAT'S NEXT FOR BRITNEY?

Following Friday's ruling, Rosengart told reporters: "What's next for Britney, and this is the first time this could be said for about a decade, is up to one person: Britney."

In the weeks leading up to Friday’s hearing, Spears has publicly lashed out at her family in several Instagram posts – accusing them of “hurting me deeper than you’ll ever know” – and vowing that her fight isn’t over. “I still want justice," she declared.

The pop star is the world's most coveted interview subject and Spears has said she wants to tell her story, so expect a high profile sit-down.

Spears wil also likely be ramping up her wedding planning (she said this week that Donatella Versace is working on her gown). She shared the news in September that she is engaged to Asghari. The 27-year-old actor and personal trainer has dated Spears since they met on the set of her “Slumber Party” video in 2016.

It will be the third marriage for Spears, who tied the knot with childhood friend Jason Alexander in Las Vegas in January 2004 (the marriage was annulled 55 hours later) and was married to Kevin Federline from October 2004 to 2007.