One of the most talked-about moments at the 62nd Grammy Awards on Sunday night was the emotional performance by Demi Lovato.

The 27-year-old singer looked stunning in a custom white gown by Christian Siriano paired with a leather corset by Zana Bayne as she stood on a platform in the middle of the Staples Center. (Watch the performance at the bottom of this article.)

Accompanied only by a pianist, Lovato stopped and restarted the song as a tear streamed down her right cheek.

Lovato then belted out “Anyone,” a deeply personal ballad she reportedly wrote only days before the 2018 drug overdose that nearly killed her.

“I used to crave the world's attention / I think I cried too many times / I just need some more affection / Anything to get me by,” she sang. “Anyone, please send me anyone / Lord, is there anyone? / I need someone.”

The singer earned a standing ovation from the Grammy night audience.

“I wish there were words to describe how beautiful, inspirational, and DESERVED this moment was,” Lovato’s longtime friend Selena Gomez shared in an Instagram Story. “Demi I’m so happy for you. Thank you for your courage and bravery.”

Sam Smith shared: “I am in tears. That is singing. That is heart and that is the truth.” 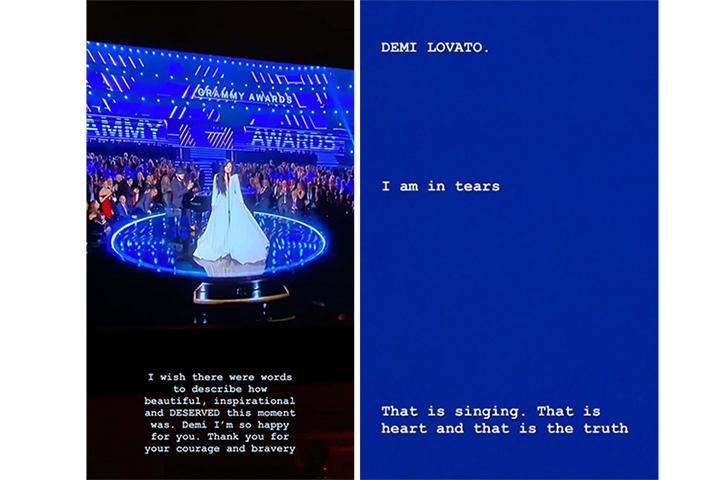 After her triumphant return to the Grammys, Lovato released the song and shared a photo on Instagram that she captioned: “What an unbelievable night. My first time back on stage in almost 2 years. So emotional for me. Thank you all for the love, support and for sharing this moment with me. I love you all.”

What an unbelievable night. My first time back on stage in almost 2 years. So emotional for me. Thank you all for the love, support and for sharing this moment with me. I love you all. 💗

Lovato will be back in the spotlight on Feb. 2 as she sings the U.S. national anthem ahead of kick-off at the Super Bowl in Miami.

Listen to music from Demi Lovato