Taylor Swift said Thursday night that her scheduled performance on the American Music Awards next week is “a question mark” because she is being blocked by her former label boss Scott Borchetta and the man who bought his label, Scott “Scooter” Braun.

Swift, who is set to be honoured as Artist of the Decade on the Nov. 24 AMAs broadcast, posted a statement on social media Thursday night.

“I’ve been planning to perform a medley of my hits throughout the decade on the show,” she explained. “Scott Borchetta and Scooter Braun have now said that I’m not allowed to perform my old songs on television because they claim that would be re-recording my music before I’m allowed to next year.”

Braun acquired Borchetta’s Big Machine Label Group earlier this year for a reported $300 million U.S. in a deal that includes ownership of the master recordings of Swift’s early albums.

Swift said in a Tumblr post at the time that she was “sad and grossed out” that Braun acquired the rights to her first six albums and accused him of years of “incessant, manipulative bullying.”

In August, Swift said as of November 2020 she will be able to record new versions of her early songs to reduce the amount of royalties Braun will earn.

"I’m very excited about it,” she told GMA. “I think artists deserve to own their work. I just feel very passionately about that.”

In Thursday’s missive, Swift also alleged that Borchetta and Braun have refused to allow the use of her songs in a forthcoming Netfix documentary.

“This is WRONG,” she wrote. “Neither of these men had a hand in the writing of those songs. They did nothing to create the relationship I have with my fans.”

Swift said Borchetta told her team she can use her music if she agrees not to re-record her early songs next year and agrees to stop talking about he and Braun.

“The message being sent to me is very clear. Basically, be a good little girl and shut up. Or you’ll be punished,” claimed Swift.

The pop star encouraged her fans to “let Scott Borchetta and Scooter Braun know how you feel about this” and to ask for help from the artists Braun manages (including Justin Bieber and Ariana Grande).

“I’m hoping that maybe they can talk some sense into the men who are exercising tyrannical control over someone who just wants to play the music she wrote,” Swift said.

“I just want to be able to perform MY OWN music. That’s it.”

Don’t know what else to do pic.twitter.com/1uBrXwviTS

Within hours of Swift’s statement, the hashtag #IStandWithTaylor was trending worldwide and she got high-profile support from Halsey.

"This is just mean," Halsey opined in an Instagram Story. "This is punishment. This is hoping to silence her from speaking about things by dangling this over her head."

The pop star blasted the decision to prevent Swift from performing her early songs as a bad business move and accused Borchetta and Braun of "banking on the illusion that people will not stand up for her." 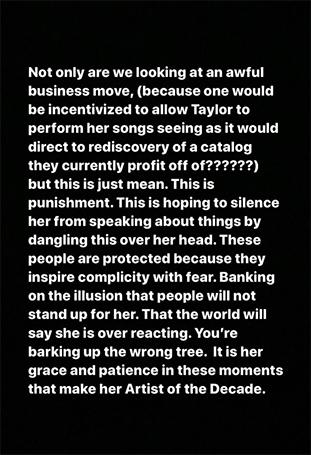 Other music stars showing their public support for Swift include her "ME!" collaborator Brendon Urie, who called Braun "a piece of s**t" in a livestream. "It just like broke my heart, I read Taylor’s statement and I was like, ‘That sounds about right.’ Toxic dudes doing toxic bulls**t in this toxic industry."

"Solidarity with Taylor here," tweeted Lily Allen. "This sounds awful, and people wonder why music hasn’t had its #MeToo moment?"

Early Friday, Big Machine Label Group (BMLG) responded to Swift’s statement with one of its own.

“Taylor, the narrative you have created does not exist,” it read.

“At no point did we say Taylor could not perform on the AMAs or block her Netflix special. In fact, we do not have the right to keep her from performing live anywhere.”

BMLG claimed Swift owes “millions of dollars and multiple assets to our company” and said her message urging fans to share their feelings with Borchetta and Braun was “greatly affects the safety of our employees and their families.”

BMLG claimed Swift has refused opportunities to speak directly with the company and resolve issues.

“When that happens, you will see there is nothing but respect, kindness and support waiting for you on the other side,” read the statement. “Rumors fester in the absence of communication. Let’s not have that continue here. We share the collective goal of giving your fans the entertainment they both want and deserve.”

Swift’s rep Tree Paine countered that a BMLG executive, whom she did not name, advised the singer’s team on Oct. 28 that the company “will not agree to issue licenses for existing recordings or waivers of its re-recording restrictions” for the Netflix documentary. Paine said Borchetta “flatly denied the request for both American Music Awards and Netflix” on Thursday.

Paine added that Swift does not owe BMLG and, in fact, an independent auditor determined that the label owes Swift $7.9 million U.S. in unpaid royalties.

Listen to music from Taylor Swift