Did UK Man REALLY Change His Name To Céline Dion?

Did a man in the UK legally change his name to Céline Dion while drunk? The answer is oui and non.

Thomas Dodd made headlines around the world over the holidays after a Dec. 30th tweet in which he said the country’s COVID-19 lockdown was “the least of my worries” after he received a pack of documents in the mail.

“Apparently at some point over Christmas I’ve had one too many vinos and legally changed my name to Celine Dion!,” the 30-year-old fan of the Canadian singer captioned a photo showing documents from Deed Polls Online, one of several private companies in the UK selling the documents.

According to The Guardian, companies like Deed Polls Online "are not government agencies, their ‘official’ stamps have no status, they have no special powers to assess or reject deed poll applications, and their deed polls carry no more legal weight than a DIY version you could print yourself for free.” Donna Ferguson reported in a 2013 post that documents like the one Dodd displayed on Twitter “are not a necessary part of the legal process to change your name."

UK citizens 16 and older can legally change their names at no cost simply by printing a deed poll and having it signed by a witness. The UK government offers a deed poll template online – and free printable templates are provided by others online. (Getting your new name “on the public record” requires an application that costs £42.44 – about $75 CAD.)

Dodd filled out a form at Deed Polls Online indicating that he wanted to change his name to “Celine Dion” and paid a fee – “from just £8.99” (about $16), according to the website – plus the cost of additional copies. If he indeed had "one too many vinos" when he placed the order, only he knows.

A few days later, Dodd received the documents in the mail. If, in fact, he had sober second thought about becoming "Celine Dion," he simply had to rip the documents up and throw them in the trash. Instead, he got roommate Kate Eaglesfield to fill out and sign the documents as a witness and then he snapped a photo and shared them on Twitter. 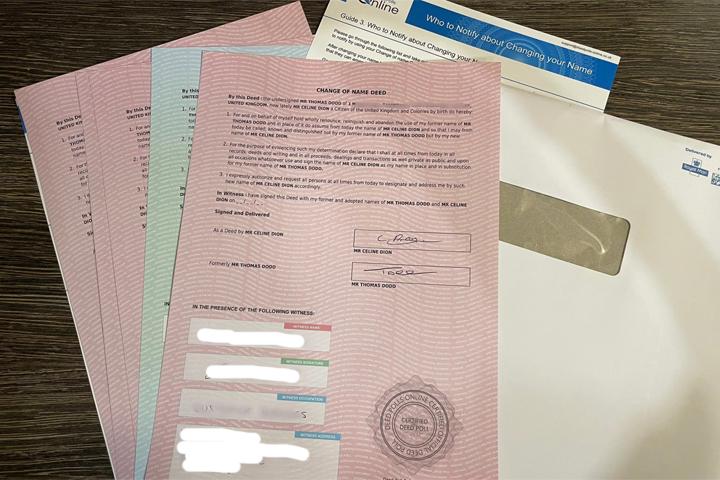 Under UK law, his name would only be changed if he submitted the completed documents to a passport office, bank, etc. If he does nothing with the documents he's still Thomas Dodd.

Not surprisingly, in this time of lazy journalism and click bait, Dodd’s tale quickly became a global news story – and he was happy to play along. (It’s hard work being a Celine Dion," he tweeted on Sunday.)

He told BirminghamLive: “I walked in from work and there was a big white envelope with ‘do not bend’ written across it. I nearly passed out in my kitchen when I opened it.”

On social media, the Celine Dion wannabe is getting called out. "You drunkenly paid an expensive printing service to send words on posh paper,” tweeted Zachary Collins. “You were sober when the documents arrived. You then signed them and found a witness."

Dodd, who did not respond to an interview request, has already hinted it was a publicity stunt. "If this gets to Celine,” he told BirminghamLive, “someone best make sure I have a defibrillator next to me.”

The real Céline Dion has yet to take the bait.