Canada’s Dan Levy relived the shock he felt when he saw Kelly Clarkson fall down a flight of stairs while shooting a music video 15 years ago in Toronto.

Levy, then 21, was an extra in a wedding scene in the video for Clarkson’s “Behind These Hazel Eyes" that was shot inside the Grace Church on-the-Hill in the city's Forest Hill neighbourhood.

“The direction for the people at the wedding was ‘Kelly’s going to run by you – you’re shocked, you’re stunned, there’s drama – so watch her as she runs through,’” the Schitt’s Creek star recalled on The Kelly Clarkson Show episode that aired Tuesday. “So we all were watching you. We watched the doors fling open and then we watched you free-fall forward down the set of stairs.

“And then there was like an odd calm that hit the room. ‘Is she still alive? What happened to her?’ I remember, it was 15 seconds of like deafening silence and then we hear from down the stairs: ‘I’m good!’”

Clarkson told Levy she “almost died falling down those stairs.” The scene called for the singer, in a wedding dress, to run down the aisle and throw the church doors open. “Nobody actually told me that there were stairs when you open the doors,” explained Clarkson. “I ran and I ran so hard I didn’t actually fall, I flew down the stairs with this giant dress. Didn’t get one bruise.”

(A few weeks later, MTV News reported that Calrkson “left the shoot with bruises all over her body and still has a sizable green-and-yellow splotch on her left bicep.”)

During Levy’s appearance on her daytime talk show, Clarkson played a clip of the video showing Levy’s blink-and-you-miss-it appearance as a wedding guest. “I feel like when you have to go ‘There I am! Oh wait, there I am!’ I feel like it’s not a starring role,” Clarkson joked. 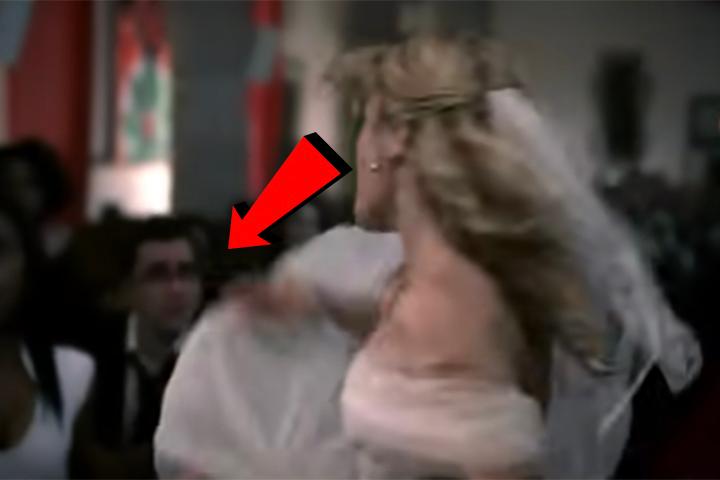 The video for “Behind These Hazel Eyes” was directed by Joseph Kahn over two days in April 2005 while Clarkson was in Ontario on The Breakway Tour.

The experience didn’t sour Clarkson on working with Kahn in Toronto – in 2009 they shot the video for “Already Gone” in the city.

Watch the 2005 video for "Behind These Hazel Eyes" below:

Listen to music from Kelly Clarkson