The stars are coming out in Toronto on Sunday for the 2018 iHeartRadio MMVAs – and none are shining as bright right now as the show’s host, Awkwafina.

The 29-year-old multi-talented artist can currently be seen on the big screen in Crazy Rich Asians, which debuted last weekend at No. 1 with $26.5 million (U.S.) at the box office. Earlier this summer, Awkwafina was part of the ensemble cast of Ocean’s 8, which also opened at No. 1 and has since earned an impressive $288 million (U.S.) worldwide.

Thank you guys for believing in Awkwafina. pic.twitter.com/DDuhE5ZQf2

You’ll have to tune in to the iHeartRadio MMVAs to see what Awkwafina brings to the stage, but in the meantime, here are 10 things you should know about the big night’s host:

- Her real name is Nora Lum but she adopted the nickname “Aquafina” when she was a teen. When someone pointed out she could face legal action from PepsiCo, her name became Awkwafina.

- Half Chinese-American and half South Korean, she is the second Asian – after Psy in 2013 – to host the MMVAs since the show started using celebrity hosts in 2009.

- Awkwafina started rapping when she was 13, trained in classical and jazz music at high school, and was laying down tracks on her laptop at 17.

- She has a tattoo of a trumpet (an instrument she played) on her right arm.

- She has released two EPs – 2014’s Yellow Ranger and this year’s In Fina We Trust. Awkwafina recently told Billboard there could be a new collection of songs “in a year, maybe even less.”

- Awkwafina knows Canadian music. She told The Globe and Mail: “I love Feist, I love The Stills, Broken Social Scene. I’ve got to show some love for Drake.”

- Her breakthrough video “My Vag” got her fired from her job at a PR firm. She recently told Late Night host Seth Meyers she never “felt closure from that moment” until she looked up at the company’s building after a day of shooting scenes for Ocean’s 8 and realized she had come full-circle. 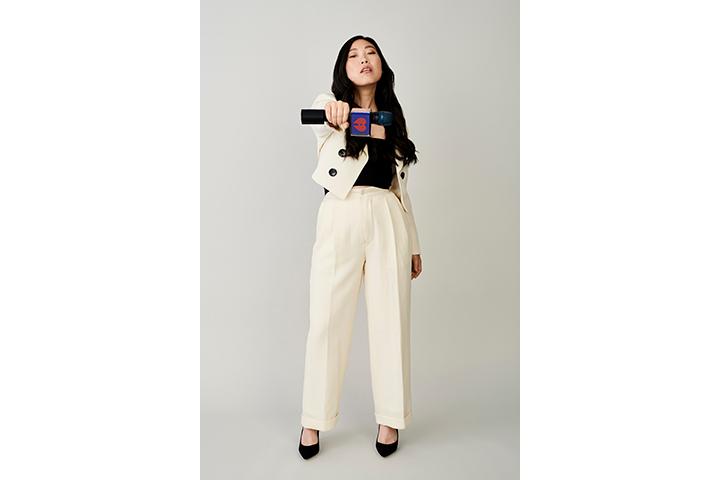 - Her early movie roles included Neighbors 2: Sorority Rising with Canada’s Seth Rogen. She told Elle that when she was young she watched 1997's Air Bud and thought it would be cool to play Canadian actor Kevin Zeger’s part.

- She knows she’s a role model. “I'm representing my community in a bigger way than I ever have,” Awkwafina told Elle. “There are young Asian girls that really look up to me, and I say that in the most non-cocky way ever. You have to represent them well, and in doing so you can't be controversial in a way that is ignorant. I'm so scared of saying the wrong thing, or having it be misinterpreted.”

MORE: Love Is In The Air At iHeartRadio MMVAs

- He won’t be at the MMVAs, but Awkwafina thinks it would be cool to meet Justin Trudeau. “He’s a heartthrob inside and outside,” she told The Canadian Press. “But I know he’s a busy dude, being a heartthrob and making public policy changes and things like that.”

The iHeartRadio MMVAs will be broadcast live on CTV, MTV, and MUCH. Fans can also tune in to the livestream at iHeartRadio.ca and on the iHeartRadio app as well as on Twitter. Virgin stations across Canada will also broadcast the show.