Simple Minds has enough hits from the 1980s to ride a wave of nostalgia – including “Alive and Kicking,” “Sanctify Yourself,” “All The Things She Said” and, of course, “Don’t You (Forget About Me).”

But, founding members Jim Kerr and Charlie Burchill are instead riding a new wave of success thanks to 2014’s Big Music, 2016’s Acoustic, and the brand new album Walk Between Worlds. They will spend the summer performing shows all over Europe.

Kerr and Burchill, both 58, are the only remaining original members of Simple Minds – which is just fine since Kerr’s vocals and Burchill’s guitar have defined the Scottish band for more than four decades.

Kerr, on the phone from New York City, spoke to iHeartRadio.ca about his band’s journey, its new album, and his mixed feelings about that song from The Breakfast Club.

Some people talk about Simple Minds as making a comeback or as a nostalgia act but true fans don’t feel like you ever went away. Do you see your success in the ‘80s as something you have to match or was it just part of the journey of the band?

I know what you mean, however I think we have to own up to the fact that the wheels started to come off in the early '90s with some of the departures [of band members]. In the ‘80s we did however many albums – eight albums or something – in the ‘90s we did three, one of which the record company didn’t put out. So, you know, there wasn’t really anything happening in the ‘90s and if you lose a generation of people it’s going to be hard to get that impetus back or people will look at it as a so-called comeback. But that’s the way things are and, of course, that frustrates me. Would I rather that was not the case? Yes.

Let’s look at some of the upside. The impetus the band has just now, the head of steam that we’ve worked up particularly in the last five, six, seven years… we might not have had that had we not had that gap in the ‘90s that’s allowed us this second, third wind. Perhaps if we had continued working right through the ‘90s, perhaps we would be jaded now. Perhaps we would have run out of ideas. I think some of these acts are running on fumes. I don’t think Simple Minds are running on fumes. I can tell you now, not only just the reaction to Walk Between Worlds, we’re in deep with the writing for the next one and it’s not going to be inferior.

When you have a career that lasts for 40 years, it’s not just a career, it’s a life. And as we all know, life doesn’t always pan out the way you would like it to. You’ve got to go with the highs and lows.

Does it ever hit you that you’re talking about making music 40 years later?

Well, how amazing. If you had told me when I was a kid, when we were starting out, that we would even get a record deal, never mind 40 years later still be full of enthusiasm… It blows my mind. We’ve been blessed.

Simple Minds has always played with diverse influences and sounds and genres. Did you ever feel a pressure to stick to a certain style? Is there a Simple Minds sound?

When people used to say to me, “It sounds like Simple Minds,” I’d say which Simple Minds?

The identity of Simple Minds has always been there. We’ve always felt restless. We do want to evolve. It’s the only way. It’s quite a trick and you can’t keep doing the same old, same old, that’s for sure.

Talk about the decision to put only eight songs on Walk Between Worlds.

Charlie and I thought, let’s try to get a focus to this stuff. Let’s whittle it down and try to get eight tracks that are events within themselves and see where we go. Let’s make it 40, 42 minutes, which is the old vinyl template.

What one track on Walk Between Worlds would you tell someone to listen to first?

If that person’s a radio programmer I’m going to choose “Summer” but if it’s someone who’s got a broader outlook, “The Signal and the Noise.” I think that’s a hell of a track.

Yes! I love the line: “Forget those battles, those ones that mean nothing to you.”

I’ve applied that to my social media use.

Oh great! I applied it to my brother. (laughs)

Yeah, that’s a good one. Sometimes you get one, you just slot it in, and go “that worked perfect.”

In concert, how do you showcase the new songs but still give longtime fans the songs they came to hear?

You’re right, it is a problem. When there are so many songs you’re never going to please everyone. A good set should run the whole gamut. People should hear the songs they expect to hear. You want to go back to the early days, you want to bring it up to the current, you want to throw in a few surprises.

Before a tour we work solidly on a pool of 25 songs knowing that we’ll play 20 songs a night and knowing that each night we’ll chop a few and that keeps things fresh and keeps us on our toes. There’s no perfect set. But by and large whatever we’re doing seems to be working.

Except you haven’t been to Canada in awhile.

That disappoints me because Canada – and I have to say it – Canada was one of the first places ever to give any encouragement to Simple Minds. And I really mean that. Not just Toronto and Montreal. I’m talking about Winnipeg, Edmonton, Calgary. I’ve got great memories… We learned the ropes back in those days of going out and playing those places.

The last time we were in Canada was a few years ago, at [Toronto’s] Massey Hall and it was a great night. Apart from that, I’ve got so many friends there as well. I had meetings yesterday about coming to play live and let’s hope that comes to fruition.

Simple Minds has always put female artists front and centre – in your early videos and in your live shows. What draws you to work with so many women?

Cherisse Osei [who plays drums on one track]… If Prince was alive he would have absconded with her by now. She’s that great. She’s incredible. 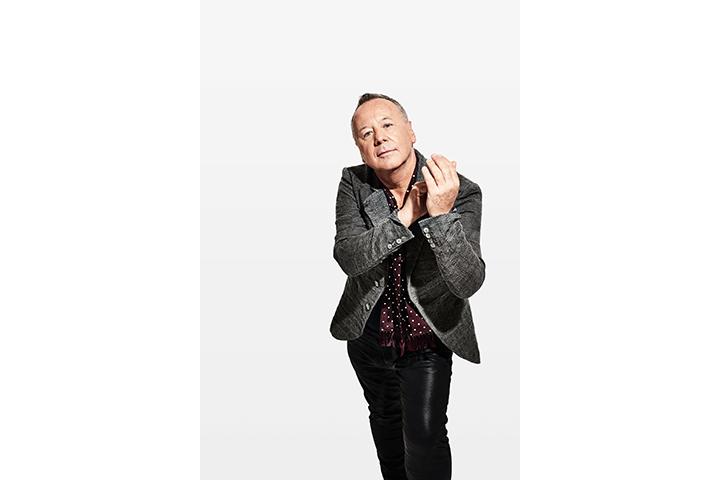 “Don’t You (Forget About Me)” is so closely tied to Simple Minds but it’s not your song and I heard that you were initially reluctant to record it. Has that song been a bit of a double-edged sword?

It’s a weird one because at the time, you’re right, when they came to us we were young, we were precious, we were precocious. We thought, “why are we going to do someone else’s song, we’ve got our own songs?” And then A&M, our label at the time, sent us this thing. They were doing the movie [The Breakfast Club] and they were keen to have their own act involved.

No one really expected it to be the success that it was and we certainly didn’t, and needed a lot of convincing. When the song was presented to us, it sounded cool, it just didn’t sound like us. It sounded like Psychedelic Furs…and I like Psychedelic Furs. We really took a lot of convincing. We said we can take an afternoon and see what happens. We put our heart and soul into it. We came up with the intro, we came up with that catchy “la la la” thing but we still always felt… and then when it got so successful ironically we kind of felt like we didn’t deserve the success and that kind of weirded us out a bit.

The song doesn’t belong to us. It’s one of these things. It means so much to a generation, to subsequent generations, and every time we play it we give it 100 per cent and we hear it through their ears. We would never play the song in a rehearsal but when you stand in front of an audience you hear through their ears and that’s enough to make you want to do it as best as you can.