WATCH: Hanging Out With... Why Don't We

The five guys of Why Don’t We appear to be rested as they arrive at a Montreal radio station for an interview only hours before their concert.

Corbyn Besson, Jonah Marais, Zach Herron, Jack Avery and Daniel Seavey (pictured above, from left to right) just had a day off in the city following their tour stop in Boston. Herron, the youngest, complains of nausea but the others are in good spirits.

“We’re having the time of our lives,” declares Besson.

While in Montreal, they practice French phrases and experience certain truly Canadian things – Marais raves about having had his first Caesar (a cocktail of vodka and Clamato juice) and Herron watches curling on the TV in their dressing room (“How is this a sport?,” he wonders aloud).

Since being put together in 2016, Why Don’t We has built a fanbase of young females through prolific use of social media, regular releases of new music (they put out five EPs in one year), and steady touring.

Their songs, with titles like “These Girls” and “Just to See You Smile,” are heavy on production but all five members are talented and capable singers. Their latest single, "Trust Fund Baby," was penned by Ed Sheeran.

The guys of WDW are also charming and disarmingly polite (Avery tells a radio host: “When you smile I’m like, darn, I have to smile now") and they clearly love each other like brothers (Seavey says of Marais: “You just look at him and you’re like, ‘I feel better’”).

But, spend an afternoon with WDW – see video below – and you see how hard the guys are working for their success.

Their team keeps them on a tight schedule. After a pair of radio interviews, they’re taken to an Italian restaurant for some pasta to-go before they’re whisked to the venue and right onto the stage for a soundcheck. In the green room, they take turns autographing stacks of cards for fans.

MORE: Q&A With Why Don't We

Then come the meet-and-greets. At the first, a small group of fans who paid for the chance to meet the singers are made to feel special with hugs, small talk and selfies. “Je t’aime,” Marais tells a fan mid-embrace, while Besson gets down on one knee to re-arrange the shoelaces of another.

The guys move to a different spot in the venue and get ready to have their pictures taken with dozens of fans who are lined up waiting for a few seconds with WDW. Each girl is rewarded with a hug from each singer before the flash goes off and they’re waved away.

In less than two hours, WDW will be on stage performing in front of more than 2,000 screaming girls (and a few parents). Then it’s back on the bus and on to the next city – in this case, Toronto –  where they will do it all over again. 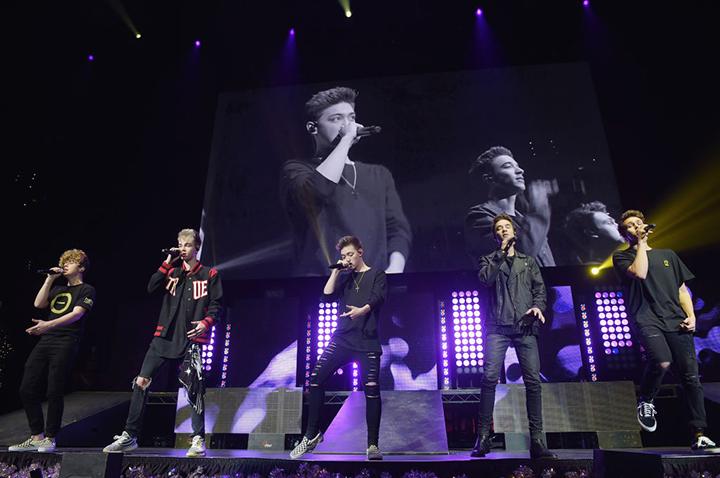 In an interview with iHeartRadio.ca last September, Seavey seemed to get ahead of any criticism.

“We have our own thing going,” he said. “We’re just doing the music we love. We’re not trying to fit any ‘boy band’ term.

“We’re just a group of guys who love to make music that they love to listen to.”

The North American leg of WDW's Invitation Tour wraps up April 25 in New Jersey and then they head overseas for a 16-city European tour.

BELOW: Watch Hanging Out With... Why Don't We, an exclusive look at one afternoon with WDW in Montreal.