Why Don't We Comes Back With A Bang

Why Don’t We is ready for the next chapter… one that they are writing themselves.

The pop group – made up of Jonah Marais, 22, Zach Herron, 19, and 21-year-olds Jack Avery, Corbyn Besson and Daniel Seavey – has ended its nine-month hiatus to release the thunderous new single “Fallin’.”

The song is the first taste of WDW’s forthcoming sophomore album, which they wrote and produced. (They're not ready to share a release date.)

Why did WDW need to go away? Between November 2016 and October 2018, they released six EPs and an album, 8 Letters. They seemed to always be on tour somewhere in the world, always doing interviews and appearances, always engaging with fans on social media.

“Our fans were really the ones that made us aware that we should probably take a break,” said Seavey. “There was a hashtag trending on Twitter one day, while we were still on tour, that said ‘Why Don’t We needs a break’ and it was kind of directed to our management to ask them to let us off of the road.

“We were kind of in this headspace of like, we need to stay on the road – until we saw that and we were like, damn, maybe we do need a second.”

On the eve of the release of “Fallin’,” four of the five members of the group sat down to chat via Zoom about how their hiatus inspired the next chapter in the story of Why Don't We. (Watch highlights below.)

You guys just disappeared, but it looks like you’ve been up to a lot of creative stuff and not just chilling out. How have you spent the last few months?

Daniel Seavey: We have been up to many things. We’ve been working on an album. Honestly, it was pretty nuts because we were planning on taking a three-, maybe four-month break and then this whole COVID thing happened and really set us back. But in a weird way it was a blessing for us because some of the best music on this album came out of COVID and that extra time we were given. Everything happens for a reason and we’re back and definitely better than ever.

It looks like you guys are more involved, more hands-on with this one. Is it fair to say this is something you’ve taken more ownership of?

Jonah Marais: This is the first song that’s ever come out that’s just us writing and producing it and it’s been a process getting to this point. We honestly started writing this album maybe two years ago on tour and it’s been just sort of been a hobby of like, after a show we just go on the tour bus or in a hotel room and work on writing a song. And it got to the point where we had all this music and we came into this year and we were like, “You know, we could just go for this and do our thing.” And COVID really gave us some extra time. We wrote “Fallin’” … it was the last one to come. We had the whole album done. If COVID hadn’t happened then we wouldn’t have gotten that, so I guess that’s the silver lining.

DS: We’ve been working on this music for quite some time. The reason that we hadn’t released any of the music that we were writing prior was we really didn’t have the time, first of all being on the road, to really go to a mixer and to properly pitch this to the label and everybody. And we didn’t really have the validation that I think we needed to really feel good about our music. And any artist that’s trying to make their own music I would just say trust your damn gut at the end of the day because, I mean, we slept on some of these songs for two years and now they are being talked about as maybe the next single. You really just got to trust your instinct. If all five of us liked the song, that’s what really told us that it should be on the album. There were some songs that weren’t that magical but there definitely were a big handful that were. And we wrote probably 100 songs on the road but the album is full of the ones that were really just special.

It must have been nice to have some time off to just sort of breathe and soak it all in.

Corbyn Besson: Yeah, we took the first couple of months of this year, after we kind of announced that we were going into a social media darkness, to just focus on ourselves and focus on friends and family and what not – and then we kicked back into gear and started really fine-tuning the records and picking them out. But [it was] definitely much needed, especially coming off of three years of touring. Over this past nine months we’ve all really really grown as people and grown a lot as artists and as songwriters, and Daniel especially as a producer. It’s just been good. It’s just felt like this new sort of life has been breathed into us, by ourselves. 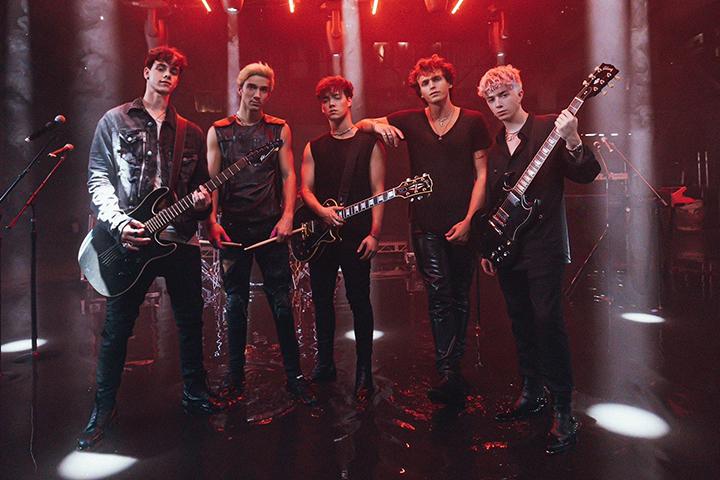 Were you happy that when you came back everybody was just gung-ho again, like it was almost like nothing had happened?

CB: Yeah, I was wondering throughout the whole break – especially when it got prolonged due to COVID and everything – I was wondering what’s the comeback going to be like? How explosive is it going to feel? There was a certain amount of pressure to make sure we picked the right song and to make the biggest impact and that’s why I think “Fallin’" was so magical because it kind of just popped out of thin air and it was one of those songs that wrote itself and just pieced itself together so quickly and so effortlessly. And the fact that it was the last song we wrote for the album. It was just this weird closing point of like, ok you’ve finished writing the album and now you have that song that you feel like you’ve been needing the whole time.

JM: We had ideas for other singles on the album prior to “Fallin’” and then we wrote “Fallin’” and it was like boom, right in your face, like this is the obvious one.

CB: And I knew coming with “Fallin’” was going to be a nice hard impact. The song is very thunderous and in your face. As soon as we wrote and finished that song, we were like, yeah. The explosion has been great. The fans are going crazy, which is really great for us to see. I’m excited for them to hear the music and see the video.

Are you worried if this COVID thing keeps going and we’re under a lockdown that you might not be able to step on a stage for another year?

JM: We’re just listening to government officials and whatever they’re saying we’re allowed to do. Obviously our fans’ health is the most important thing but when we’re allowed to, we’ll be out there as soon as we can, that’s for sure.

Is the show going to be a little bit different now? Are there going to be more instruments?

JM: We’re all playing instruments. It’s going to be a whole different thing. I’m so excited.

DS: In the same way the music has suddenly woken up to this whole new beast, the show is going to follow.

What have you learned in the last three or four years?

DS: With the music business, as you know, it’s very… there’s no class taught. You just have to kind of walk through this crazy s**t road yourself. Thank God we’re in a band, that makes it 10 times easier. But it’s a crazy industry and you honestly have to learn just about everything, I feel like, which is nuts. You have to learn everything that’s on the table so then you can decide what kind of artist you want to be and all that stuff. It’s up to you. You really do pave your own destiny in music more than anything else.

JM: We came into this industry as kids and we grew up quick. Zach was 15, I was 18. We’ve been around the world a couple of times and seen things and we’ve met people. It’s taught me so much about different cultures and getting perspective on life and realizing how blessed we really are to be in this position to influence so many people. We literally have the power to change people’s lives and I just feel so lucky to be able to do this.

CB: You get thrust into this world of professionalism and entertainment. We were thrust into a big world and a lot to learn along the way. Even just learning how the business works and what it’s like on the backend creating music. It’s very business oriented. We’re definitely fortunate to be in this spot now and taking control over who we want to be as a band.

DS: It’s like at the end of the day we want to make music but I don’t think people realize how much you need to learn just to be able to make music for a living. It’s crazy.

Jack Avery: I just feel super blessed to be where we’re at. I feel like it’s so crazy how we’re at this spot in our life where we can buy houses for our families and have things that we used to not. The fans have done that for us so honestly, thank you. When I wake up every day I can go to my studio desk and just make music whenever I want. That’s my job. It’s crazy.

This interview has been edited for clarity and length.

BELOW: Watch highlights from the conversation.

Listen to music from Why Don't We